More about Vriesenhof
Cookie preferences
This website uses cookies, which are necessary for the technical operation of the website and are always set. Other cookies, which increase the comfort when using this website, are used for direct advertising or to facilitate interaction with other websites and social networks, are only set with your consent.
Configuration
Technically required
These cookies are necessary for the basic functions of the shop.
Allow all cookies
CSRF token
Cookie preferences
Currency change
Customer-specific caching
Decline all cookies
Individual prices
Selected shop
Session
Comfort functions
These cookies are used to make the shopping experience even more appealing, for example for the recognition of the visitor.
Note
Permanent cart
Statistics & Tracking
Affiliate program
Conversion and usertracking via Google Tag Manager
Track device being used
Categories
Information
Filter
Close filters
No results were found for the filter!
Kallista 2017 - Vriesenhof
Red wine dry South Africa Coastal Region (ZA)
24.95€ *
0.75 l (33.27€ * / 1 l)
70011-ZA-RW-BL-010-05
Details
Pinotage 2017 - Vriesenhof
Red wine dry South Africa Coastal Region (ZA)
10.98€ *
0.75 l (14.64€ * / 1 l)
70011-ZA-RW-PI-010-08

Vriesenhof in the Stellenbosch wine region is a family-run winery. The estate with the peacock in its logo sees itself as a modern, unconventional company and reflects this in its wines.

The beginning of Vriesenhof Vineyards

The Coetzee family immigrated to South Africa in 1679 and settled in the region around Table Mountain. Although they have owned land since that time, in the 1960s Jan Coetzee was the first of the family to study viticulture and turn his knowledge into a business. in 1980, he acquired the Vriesenhof estate. in 1987 friends bought the neighboring Talana Hill farm, and just a few years later the two merged to form what is now Vriesenhof Vineyards . in 2006, all but a small patch of Pinotage was replanted to the entire estate.

The Vriesenhof team sees itself as servants of nature, freely following the motto that nature creates and man only guides. Accordingly, the Vriesenhof wines do not bow to any trend, but present the terroir, as well as the year and the challenges that the plant had to overcome. At a time when everyone is urged to go their own way, Vriesenhof embodies this philosophy and gives the wines their space to develop on their own. 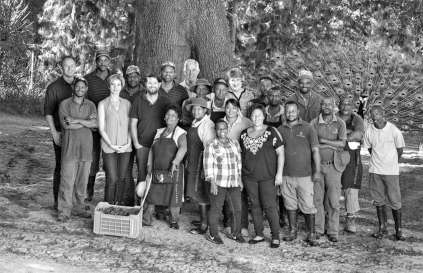 Initially, we started with the grape varieties:

Soon Chardonnay, Merlot and Cabernet Franc followed. The last to join the Vriesenhof familywas Pinot Noir. While Jan Coetzee still runs Vriesenhof and oversees the winery today, he has handed over the winemaking business to Nicky Classens, who first earned his spurs in France and most recently honed his skills under Jan Coetzee's guidance.

A special position in Vriesenhof 's portfolio has been created by Conservation, a Bordeaux-style cuvée that supports a conservation project to save South African wildlife, specifically the rhino. As a sign of this support, the rhino also adorns the label of this wine.