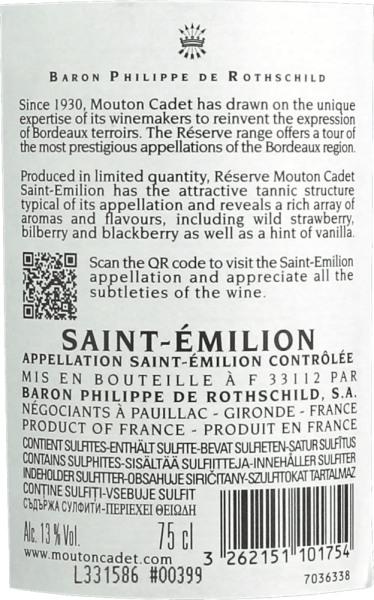 The Mouton Cadet Réserve Saint-Emilion by Baron Philippe de Rothschild gleams vividly garnet-red in the glass. On the nose, this French red wine opens up a fresh, elegant, intense and powerful bouquet with dense aromas of blackberries, currants and cherries, sweetly inserted fruits and violets, in the background reminiscences of gentle spices and mocha. On the palate the Réserve Saint-Emilion presents round fruit and soft, balanced tannins, as expected from a Saint-Emilion. Long, smooth finish.

In the Saint-Emilion region, the terroir has two different zones according to the soil structure. On the one hand there are loamy limestone soils, on which especially the Merlot variety develops well. On the other hand there are sandy, very pebbly soils, on which the Cabernet vines feel very comfortable.
For this wine 88% Merlot and 10% Cabernet Franc and 2% Cabernet Sauvignon are vinified. The Merlot gives the wine its impressive gentleness and fruit, Cabernet Franc Sauvignon lend it the structure and the ageing potential. Maceration is carried out at low temperatures before and after fermentation.

This fruity French red wine from the area of Saint-Emilion in Bordeaux is a delightful experience to game birds, roasted duck breast, gently braised beef, rabbit in spicy sauce or hare rump, to mushrooms, omelette or warm bruschetta with liver paste, or simply solo in nice round with friends and family.

Bordeaux Supérieur 2018 - Château de Ribebon
Château de Ribebon
7.70 €*
Content 0.75 liter(s) (€10.27 * / 1 liter(s))
Content 0.75 liter(s) (€10.27 * / 1 liter(s))
This website uses cookies, which are necessary for the technical operation of the website and are always set. Other cookies, which increase the usability of this website, serve for direct advertising or simplify interaction with other websites and social networks, will only be used with your consent. Mehr Informationen
Decline Accept
Top