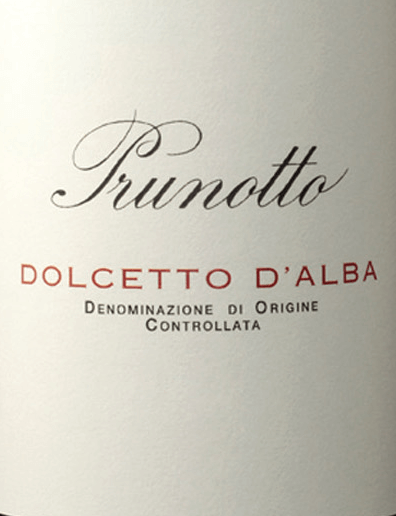 The Dolcetto d'Alba DOC from Prunotto shines in vivid ruby red in the glass. On the nose the typical vinous aromas of the variety unfold, reminiscent of flowers and ripe red fruits. This classic Piedmont red wine presents itself on the palate complex, aromatic, lively, crisp, appealing fullness and of good structure and freshness. The finish is long, pleasing and persistent.

The grapes for this pure Dolcetto grow in the vineyards of Barbaresco, Treiso, Alba and Monforte. The soils are characterised by sedimentary rock, sand and clay marl. The healthy and perfectly balanced grapes are destemmed after the harvest, pressed, macerated and fermented at a controlled temperature for a week. The malolactic fermentation is completed in mid-December, after which the wine is matured for a few months in stainless steel tanks and bottled in the spring after the harvest.
Due to its youthful character, it is recommended to enjoy the wine between the first and the third year after the harvest.

Food paring for the Dolcetto d'Alba DOC from Prunotto

Dolcetto is a traditional, classic Piedmont red wine, which can accompany an entire meal in its own way and is a particularly good complement to regional cuisine. It goes well with starters, cold cuts and cheeses. It is best served at about 16°C.

Awards for the Dolcetto d'Alba DOC from Prunotto