The Allegrini family is a long-established family of landowners in Valpolicella. Today it produces wines from a wide variety of corners of the region.

Allegrini - a family in Valpolicella

The family can trace its history back to the 16th century. Even then they owned a considerable amount of land. They passed on the tradition of viticulture generation after generation. To its current form brought the company Giovanni Allegrini, father of the current owners.

His nickname "The Barrel Spider" came from the fact that he jumped from one barrel to another during tastings. After his death in 1983, his children Walter, Franco and Marilisa took over the family business, the latter two run it today. The children Francesco, Caterina and Silvia are ready to take over the reins.

With Franco, barrique aging was first introduced at Allegrini, combined with the classic Slavonian oak barrels. In turn, however, the aging period was shortened so as not to alter the natural flavor of the fruit too much. The classic Ripasso method, in which young, fermented Valpolicella wine is added to Amarone marc to kick off a second fermentation, was experimented with. 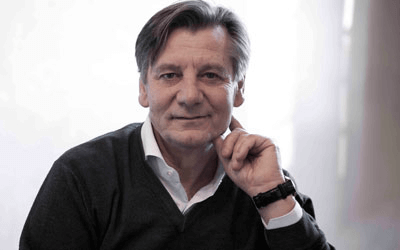 Walter and Franco didn't stop at grapes, either, and so they took on the autochthonous Corvina grape variety to improve the quality of their own wines. The planting system was also changed from the classic Trentino pergola to achieve a higher planting density.

The wine and its soils

Today the Allegrinis cultivate various grape varieties, including for example:

The grapes grow mostly in Valpolicella, the "valley of many cellars". For the most part, the soils are rich in limestone, with a comparatively mild climate and rainfall around 900-1100 mm per year. The vineyards of the family Allegrini are located in six places:

Named after the Villa della Torre, an Italian Renaissance mansion, the vines here grow on terraces with traditional dry stone walls. Despite the modernizations of the Allegrinis, the Trentino pergola system has been preserved here.

Near the town of Sant'Ambrogio lies this historic vineyard. A very thin soil layer, little organic matter, but rich in sodium and calcium and the continuous winds coupled with southeast exposure give the vines unique conditions to produce top quality grapes.

This vineyard is very similar to La Grola in climatic conditions, but the soil here is much stonier. The top layer of soil is white and thus reflects a lot of the incoming sun rays. Only Corvina is grown in this vineyard.

Located to the northwest of the town of Fumane, this vineyard is one of the highest in Valpolicella. Thanks to the calcareous soils, good drainage and sun exposure, this relatively young vineyard offers good prospects for high quality grapes.

Not far from Villa Cavarena, Corvina Veronese, Corvinone, Rondinella and Oseleta are grown here. Due to the good water supply, the grapes ripen here comparatively longer than in other vineyards.

newly planted in 2003, the deep clay soils offer a change from the Allegrini family's other vineyards. The conditions produce grapes of high sugar content and phenolic content.